This is My Faith

This is My Faith
By Shaikh Ali Al-Fatlawi

The author stated in the introduction:
“…The religion of Islam – the last of religions, the Mohammedan law that crowned all preceding celestial laws – is no exception to this rule. Our religion has principles (Osul) and branches to those Principles (Foru’) as well as Practices (Sonan). They are also known as Ideology, Jurisprudence and Ethics. Through these three pillars one can attain the Divine vicinity; each has also its own role in building the human personality. Ideology orients the human mind to the right direction away from myths and superstitions, ignorance and perversity. Jurisprudence is interested in the relation between mankind and their Creator in addition to the relation between people themselves. Ethics tries to refine the human soul from vice and to beautify it with virtue.
This book – This Is My Faith – comes to highlight the first science which is Ideology in a simplified dialogue-based style. All can understand its content as it is free from complicated reasoning and difficult demonstration. Some texts have been changed for the sake of simplification as the definitions to the five Principles are also provided. Thus, here we offer you this book in the form of dialogue-based serial stories between two friends seeking only truth and knowledge …” 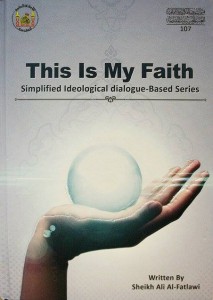